At the beginning of October, Qatar Airways announced that it would be upgrading its A350 fleet, amending its earlier order for five Airbus A350-900s to the larger A350-1000.  The A350-1000’s fuselage is seven metres longer than that of the A350-900, and the amended order means that Qatar Airways will be the largest customer of the A350-1000, with a fleet of 42 of them.  Qatar Airways Chief Executive Akbar al-Baker said in a recent statement, “Since taking delivery of the world’s first A350-1000 in February 2018, we have been extremely pleased with the aircraft’s performance, which has prompted us to update our original order.” As stated, the A350-1000  has a longer fuselage than the smaller version, but this is not the only difference between the two airplanes.  The larger size means there is room for 44 more seats, a great advantage for Qatar Airways’ growing reliance on long haul routes.  In addition, Qatar Airways’ A350-1000s feature the unique Qsuite, the airline’s signature business class seating.  This offers a new level of innovation for in-flight comfort.  And since its inception, the A350-1000 has shown unsurpassed efficiency, economics and great operational reliability. 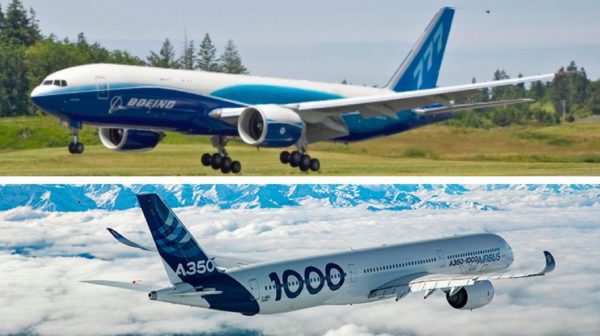 Airbus launched the A350-1000 in direct competition with Boeing’s B777.  The two aircraft are fairly similar in many respects.  So what are the actual differences between them?

Airbus says the lightweight A350-1000 is 25% more efficient than the 777-300ER, which is the most popular current version of the 777.  There is some variation in maximum range of the two types, but in practice not enough to make any appreciable difference.  In fact, both the A350-1000 and the 777-300ER are pushing the bounds of what twin-engine aircraft can be and do. They are the largest aircraft of their type, are relatively economical to operate, and have hundreds of seats worth of capacity.  The newer Boeing B777F and the B777X planned for next year will make some slight improvements, at least according to Boeing.  But in reality it could be that aircraft manufacturers are now reaching the limits of what can be done in terms of  performance, range, and economy.

Qatar Airways appears to like the aircraft of both manufacturers,.  They have recently increased their B777 fleet as well, and plan to be a launch customer of the B777X when it comes into service.

Qatar Airways seems likely to continue to increase its fleet of jets suitable for long distance routes.  They have been banned from the airspace of Saudi Arabia, the United Arab Emirates, Egypt, and Bahrain since June 2017,  as a result of those countries cutting ties with Qatar. Therefore the airline has been forced to increase operational costs by flying longer routes.  This increased reliance on longhaul operations means that the airline will most likely grow its fleet of both Boeing and Airbus wide bodied jets in the coming years.